“The twelfth animal that arrived was the meticulous and resigned Pig.” 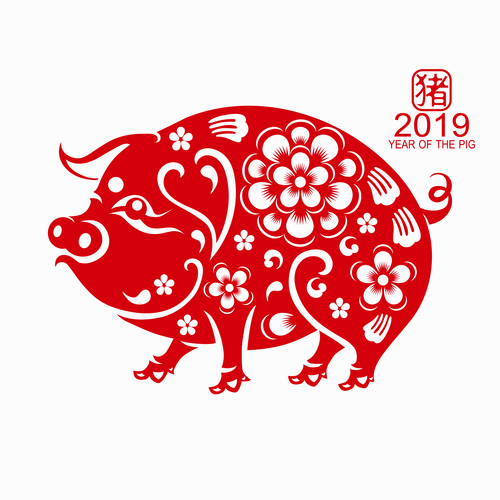 The first day of the Yin Earth Pig Year is February 4, 2019 with the Chinese Lunar New Year occurring on the New Moon in Aquarius on February 5. When the Earth Pig takes over from the Earth Dog, she will complete what the Dog began, though with a completely different style!

Although both animals are passionate souls, the Pig is more content with personal satisfaction and less concerned with the social order. As the last animal in the Chinese zodiac, the Pig represents resignation to the human condition. Sometimes passive with a “live and let live” attitude, naiveté can be a problem. With a reputation for sensuality and self-indulgence, Pigs are well loved and respected because they are comfortable living in the realm of the body and perfectly at home with their animal natures.  In fact, their instincts are at the root of their intelligence (as well as their stupidity!).  This will be a year to indulge, have fun with your fellow creatures, and enjoy “the good life”.  There will be plenty of opportunities for good food, extravagant parties and vacations, and creature comforts.  The challenge will be to keep pleasure in perspective.

Unlike the territorial animals that set the tone in 2017 and 2018 (Rooster and Dog), the Earth Pig gets along pretty well with other members of the barnyard. Since Pig values harmony over competition, kindness will be more evident in personal interactions and power and status will have less importance than solid personal connections. Perhaps we will experience more real-time conversations and discussions where people engage in exchanges of ideas and viewpoints instead of simply barking at each other through the lens of social media.

Last year was the Yang Earth Dog; this year we are in a “Yin Earth” vibration.  While last year, the Earth image was mountain (Yang), this Yin Earth year is more about the valleys – flatland, farmland, lowlands. From the mountains to the valleys is a major drop in altitude. Watch for the unexpected! Those who were strong and powerful in 2018 could encounter some major frustration on the way down. If they don’t have plans for unexpected fiascos,  they might experience the effects of a landslide in the 2019 Earth Pig year.

Pig (along with Rat and Ox) is part of the Water family and contains Yang Water and Yang Wood. Yang Wood is a tall tree. Yang Water is the river or running water. So this year’s Earth Pig combines Earth, Water, and Wood elements.  Earth controls Water, and Wood controls Earth in the theory of the 5 Elements.  We are in for some internal tension – inner conflict, resignation, and frustration coming from feeling like we are in a stalemate.

Conflict will tend to stay underground. The nature of Yin Earth is like a garden giving a more gentle, philosophical, humanitarian and peaceful vibration. People may choose to be more considerate and less stubborn, able to compromise and accommodate others but watch out! Underneath the surface, there is insecurity. The Yin Earth element sits on top of Water and apparent peace and harmony can be just that — apparent! The atmosphere will be fragile with undercurrents of secret hostility as people give in to the Pig’s tendency toward quiet resignation.

Since there is no support or creative energy coming from Fire this year, the Yin Earth Pig may bring earth disasters. Watch for sunken ground  — earthquakes, landslides, building collapses affected by underground water, mining disasters, or avalanches. The powerful Water of the Pig could also bring water disasters such as flooding, heavy rain, and snowstorms.  The last Yin Earth Pig in 1959 saw a 7.9 magnitude earthquake in East Kamchatka, a 7.2 magnitude earthquake in Yellowstone National Park, a 7.2 earthquake off Taiwan and a 7.3 scale earthquake in New Zealand. Water-related disasters included a flood in Taiwan that killed 2000 people and Typhoon Vera in Japan killing 5098 people. Similar water and earth disasters happened also the Yin Earth Pig Year of 1899 including a great blizzard in North America and a cyclone in Australia.

Lack of Fire will also have an effect on the economy. Money will be important so make sure you feed your piggy bank well. The Dog Year was the “grave” of Fire and now 2019’s Yin Earth Pig terminates the Fire completely, bringing in the Water.  Lack of Fire means lack of optimism and the negative emotion associated with Water is fear.  We are not in an “up” cycle.

Since Water nourishes Wood, Wood industries will do well – fashion, media, publishing, education, reforestation, environmental engineering. Earth controls Water, so the Pig provides money for Earth industries like real estate, mining, insurance, and computer software. Even though the general tone of the year is not optimistic, Fire industries are active and productive since Fire produces Earth — energy, finance, entertainment.  Water industries like shipping, transport, and communication will not do well due to the lack of Fire which is considered money to Water.  Metal industries like banking, machinery, and the automotive sector will also have a hard time but will be active due to the Water energy.

In the body, the Earth Pig relates to  both the Kidney and Spleen energy. Imbalanced energy in these organ systems can activate fear and worry. The Kidney energy is one of the determinants of aging in Chinese medicine. There will be more interest in health, longevity, and the healing power of sex. Emotional eating can be a problem with social concern about obesity and diabetes. And since Fire is low, the heart can also suffer. Stress management through meditation, gentle restorative yoga, and Tai Chi can help you stay on a healthy path.

Since the Pig completes the Chinese animal lineup, 2019 will be a year of completion when you can expect to finish up old projects, achieve some of your goals, and even say ciao to those who should be already on the way out the door.

Believe it or not, pigs are smarter than 3 year-old kids or dogs! They have complex communication skills with more than 20 different grunts and squeaks. Newborn piglets can listen to their mother’s voice as she sings to them while they feed. Pigs form complex social units and learn from each other in the same ways that primates do. And they are actually very clean animals – rolling in the mud is their way of cooling off. So next time you think “Pig” = Insult, think again!

Insightful, intuitive, grounded and practical, Earth Pigs are adorable, lovable, warmhearted beings. They know how to enjoy life so learn from them and take some social time-out this year to solidify your connections. Pursue joy, love, and pleasure. Go ahead…be a Pig about it!

Donate- If you find this information helpful, share your gratitude by sending some green love…I greatly appreciate your support!

Photographs, videos, and texts by Sharon Smith contained on this site are protected by United States copyright law and may not be reproduced, distributed, transmitted, displayed, published or broadcast without the prior written permission of Sharon Smith. You may not alter or remove any trademark, copyright or other notice from copies of the content. Fair use notice : This site contains images and excerpts the use of which have not been pre-authorized. Material on this site is viewable for learning and analysis. If you are interested in using any copyrighted material – such as the photographs or text – from this site for any reason that goes beyond ‘fair use,’ you must obtain permission from the respective copyright owners. If you are the copyright owner of any of the images shown on this site, and wish them to be removed, you can email me at taosharon@earthlink.net and the image(s) will be removed immediately.
%d bloggers like this: